Spring 1901:
Pretty much all the moves were standard openings, except for Austria's, who held all of his units except for one that he sent to Rumania. During this early stage, there were no major signs of any offensive move, with the exception of England opening to the English Channel and Austria moving to Rumania.

Fall 1901:
In this turn, players started to reveal their alliances. England moved his fleet in the English Channel to Belgium and convoyed his army into Norway. Russia tried to take Rumania, but was stopped by a Turkish support from Bulgaria. Italy, meanwhile, moved his armies north into Tyrolia and Venice. In the Winter builds, all the builds were typical of the situation, except for Turkey's, who built an army in Smyrna.

Spring 1902:
England continued his campaign against Russia by making it into Sweden, but he lost Belgium to German forces. Meanwhile, Russia launched a massive anti-German campaign by moving units into the Baltic Sea, Prussia, and Silesia, allowing Austria (now being controlled by Drew) to move into Galacia. Italy attempted to continue its march north into Munich, but was stopped by a sitting Germany. 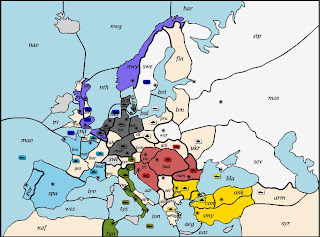