Lots of ground to cover in this post. Lots of attacking but surprisingly little stabbing in the year. So, without further ado, let's get to the update:

Fall 1902:
The invasion of Germany began in earnest, with a combination of English, Russian, Italian, and French forces each trying to get a share of the country. England tried to get into Denmark, and failed, which consequently got him Sweden from Russia, who took Berlin without a fight. Finally, Italy took Munich with French support. Meanwhile, down south, Turkey took a stab at Sevastopol but failed, Serbia remained unoccupied for another season as Austria and Turkey bounced there again, and Italy split up his forces and sailed into the Eastern Med. In the builds, Germany disbanded his retreating army, Italy built an army in Naples, and Turkey did not submit build orders.

Spring 1903:
Again, Germany was under pressure with France making it into Belgium, Russia taking Kiel, and England successfully moving into Denmark. England and France, where they weren't beating up on the Kaiser, moved their forces to the East. Russia managed to move into Ankara at the cost of Sevastopol, and Turkey managed to move into Sevastopol at the cost of Ankara. Austria concentrated most of his forces into yet another bounce with Turkey in Serbia, and Italy convoyed his army into an empty Serbia. 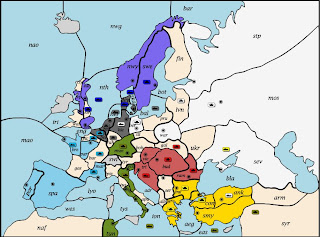